I was thinking that I have my fileserver on 24/7 and a 2.6GHz Pentium Dual Core is a bit overkill, so I decided to look at what distributed projects were going on these days. I used to run the United Devices screensaver a few years back, as well as some SETI on my old Pentium III-500 laptop and Bovine RC5 challenge on my StrongARM RiscPC’s.

I found the World Community Grid Help Conquer Cancer project uses the Linux-friendly BOINC program, so set my E5300 fileserver to work, and also my freshly overclocked and watercooled Core i5-750. Here are my statistics.

I found some useful resources for stopping BOINC from slowing your boot process, allowing remote login via RPC, allowing local login without a password etc. here and here.

As my Core i5 has a CUDA-capable Nvidia 9400GT graphics card I thought I’d try the GPU Grid project via BOINC too. Well that was a mistake – it makes the desktop totally unusable and heats the GPU to a toasty 68c or so!

It seems the coretemp module isn’t modprobe’d by default, so I’ve added it to /etc/rc.local and now I can gauge the four core temperatures as well as the possibly less accurate CPU temperature. 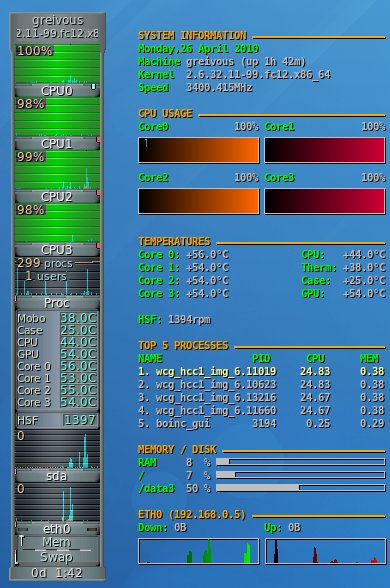 Update 2: gone back to 3.2GHz due to temps (now down to maximum 50c coretemp, or 37c CPU thermistor) and stability issues. Hopefully 3.2GHz is the sweetspot, gonna run BOINC overnight at full poke to test.

Update 3: Corsair are going to send me some extra screws to attach the two 120mm fans to the radiator of my H50-1 to make up for me having to order the retention bracket kit as the one from Amazon was defective.