Inspired by this Reddit post, I decided I’d have a go at making a soldering board with helping hands.

The bill of materials is over £10, but I’ve bought more than I need, so probably under a fiver for the build:

Note that my local PoundLand was selling stuff for 90p for a few months, but its back to £1 now :-(

I used some M3x25 hex bolts and nuts to attach the crocodile clips to the hoses, but you could use whatever you have, some people even use zip ties.

I also added some heatshrink over the teeth on the crocodile clips, so they don’t short/scratch my circuits. 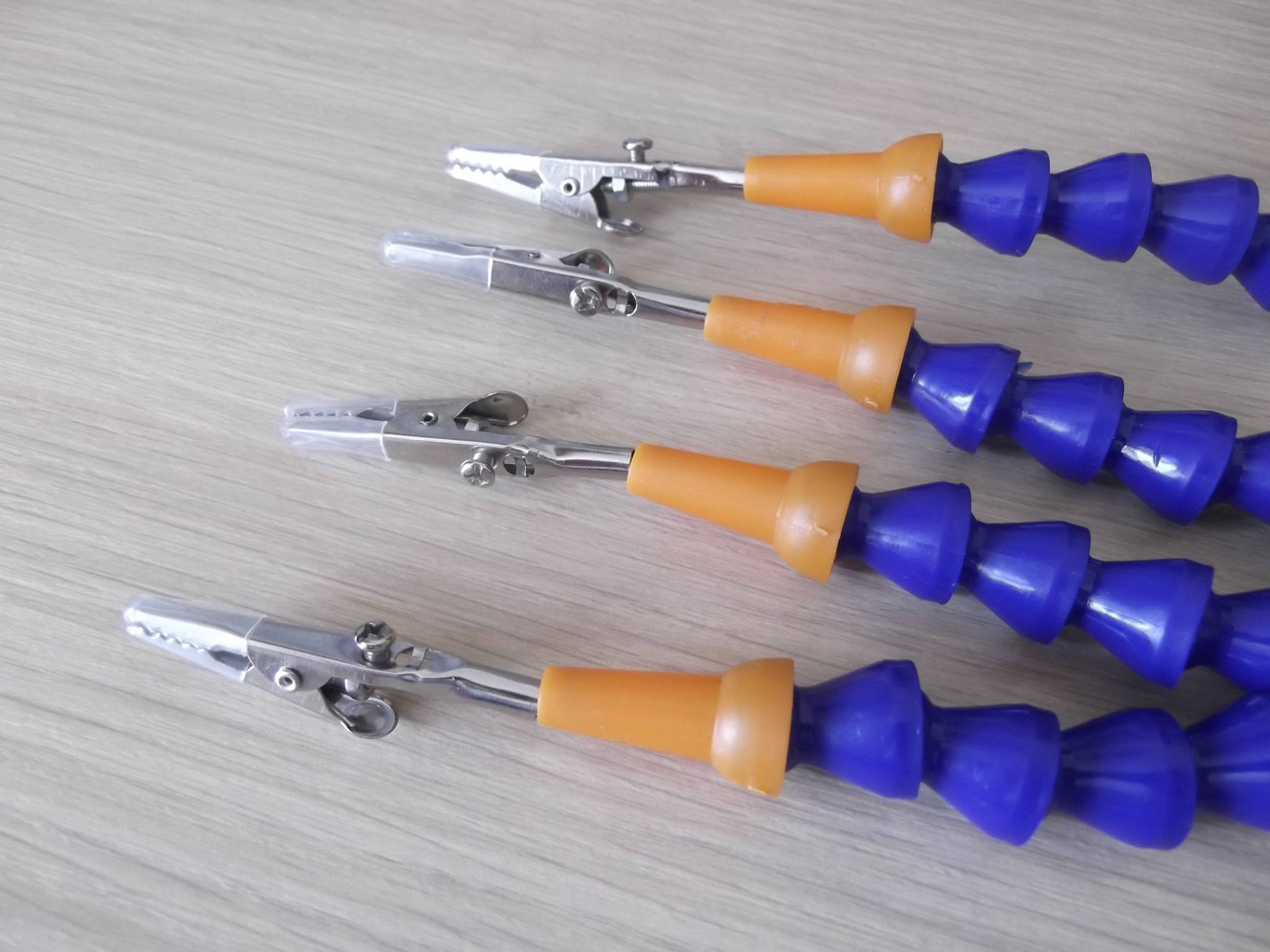 The hardest part was cutting the wood – it was pretty rough and not straight or the right size, so first I tried cutting it with a hacksaw which worked well but took ages. The I tried a jigsaw which was faster but awkward, I ended up using a full saw and my Dremel to bevel the corners with some 150 grit sandpaper to smooth the surfaces.

I tested the heatproof silicone mat by warming the iron to 350c and melting some solder, then flicking it onto the mat. It worked a treat and didn’t even stick, even though its only rated for 150c I think. 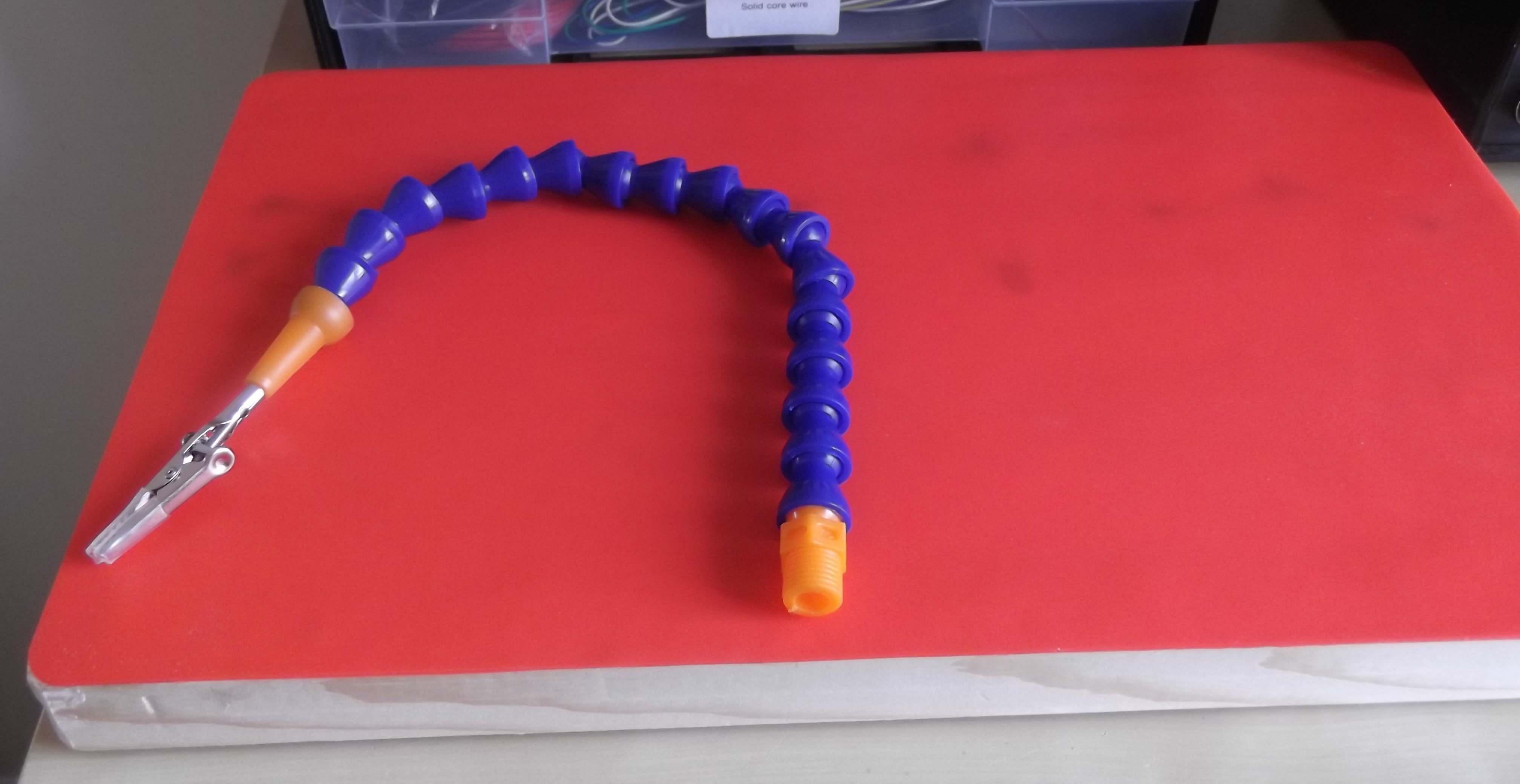 To stop it moving and scratching my desk, I added some anti-skid felt feet, although you could probably add another mat and then you could turn it over when its dirty. 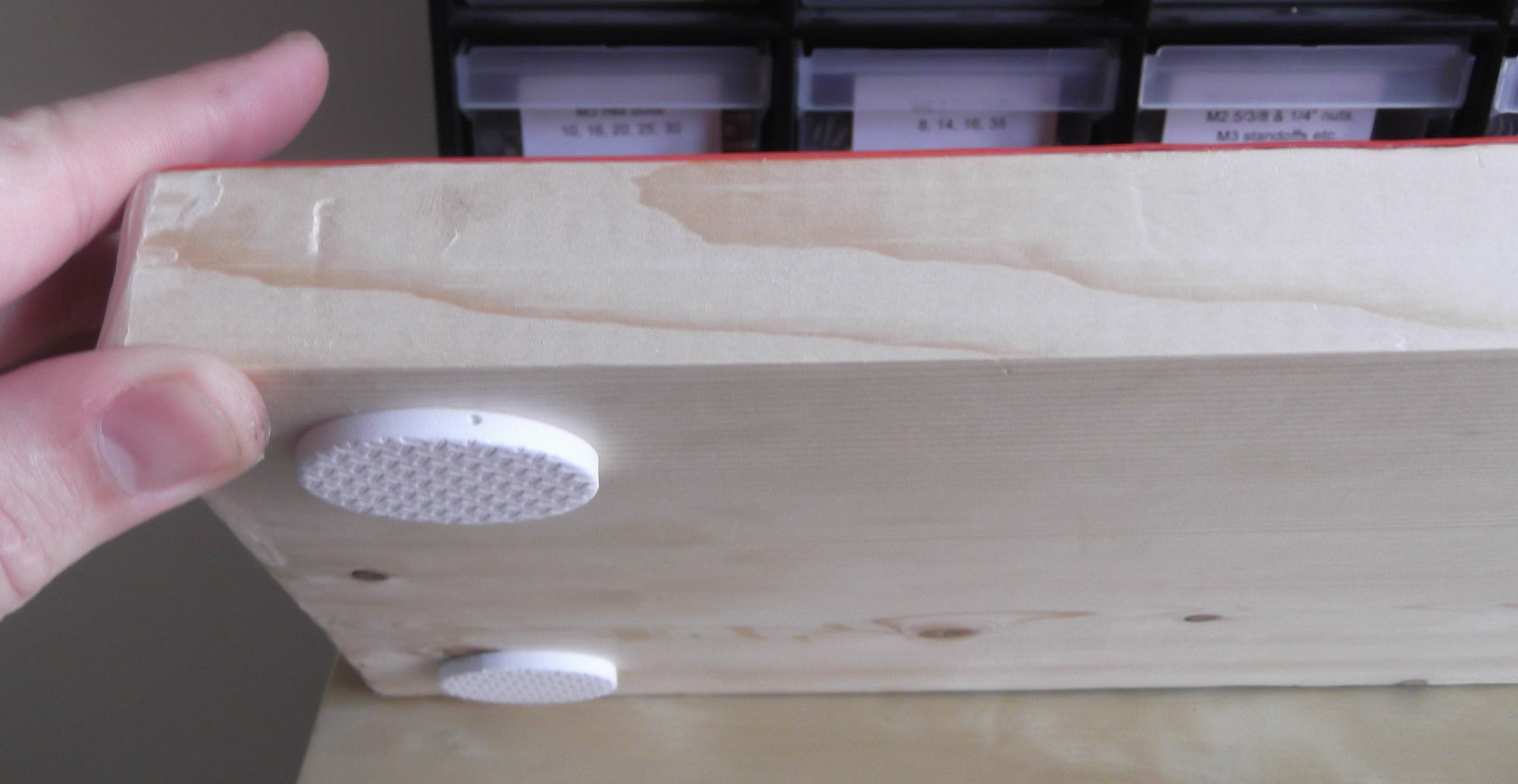 I drilled the holes after putting the heatproof mat on which was a mistake as it tore up the mat. I can see the drilled holes through the material so when the replacement mat arrives I will cut corresponding holes in the mat. The 12mm drillbit was just the right size, I’ll put some epoxy in and the arms will never move.

Here is the finished article holding a circuit: 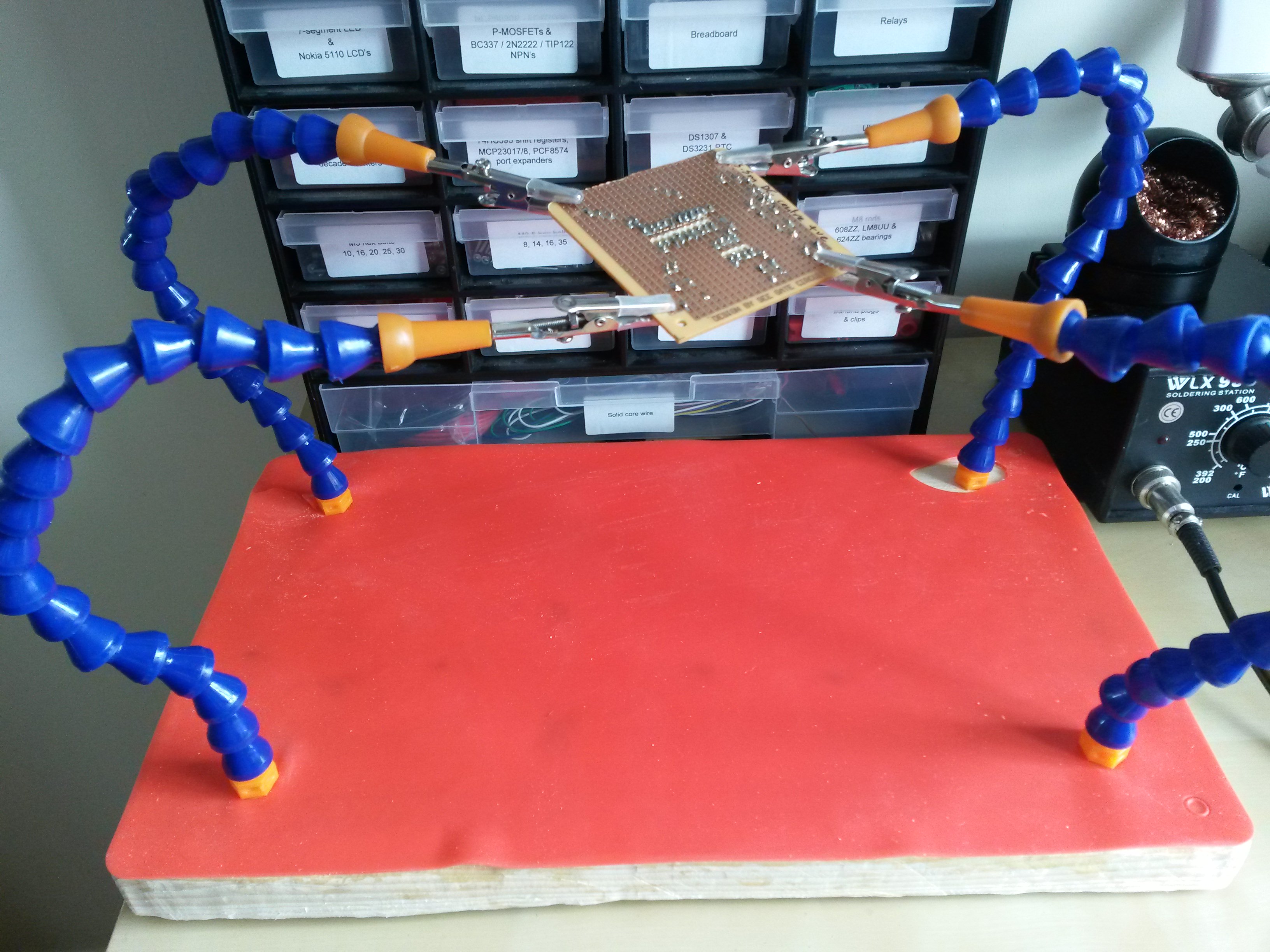 And here it is holding the weight of my cellphone, which is acting as an inspection camera and lamp: 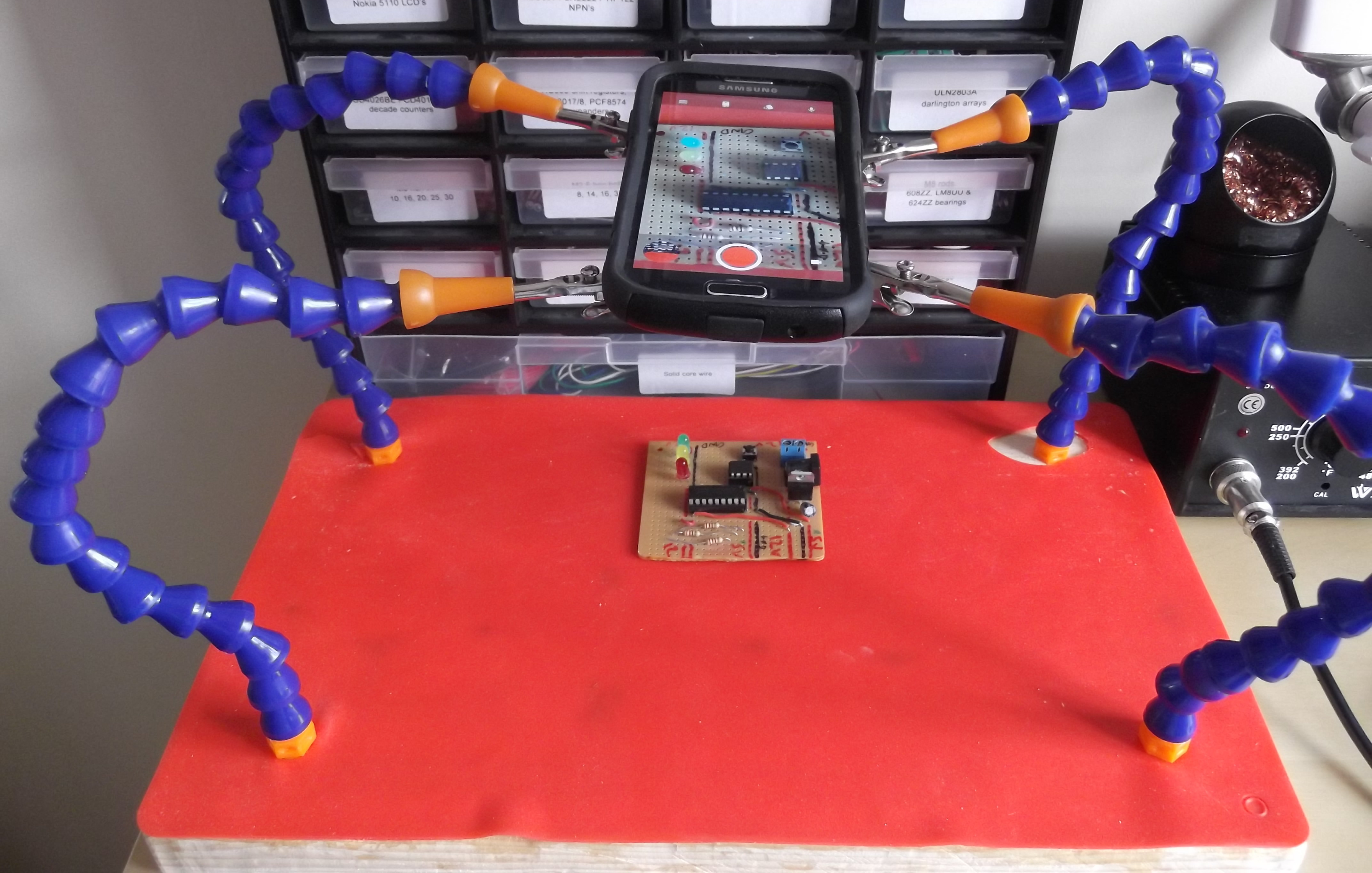 Update: I’ve replaced the nut and bolt holding the crocodile clips on with a banana plug. I made the hole in the orange tip slightly larger and pushed the banana plug through then filled the inside of the tip with hot glue (well not totally, the blue hose has to fit!) so now I can slip on whatever connect I fancy as long as it has a banana plug connector!