I had a bunch of old DIP IC’s like 555 timers and 4017 decade counters, so thought I’d do something with them, and of course blinkenlights was the first thing that sprang to mind!

I had a JLCPCB voucher so set to work making a PCB. 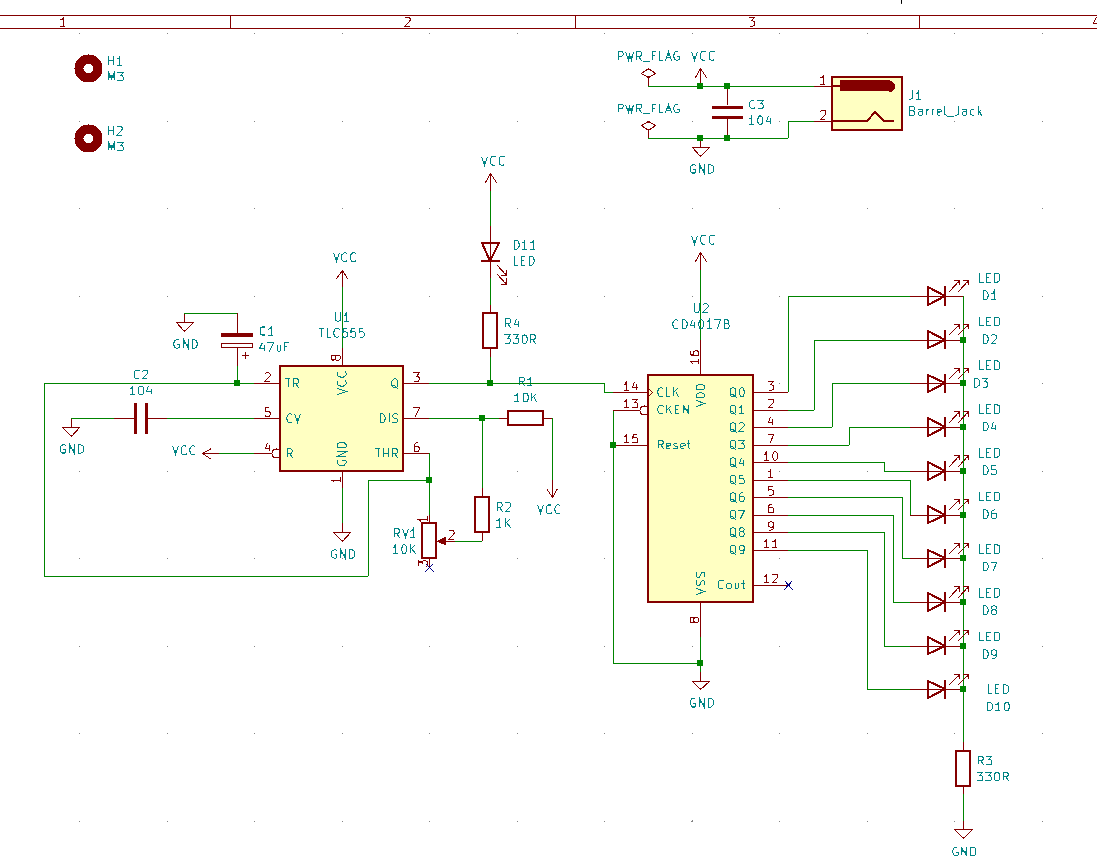 Next, I switched to KiCad’s PCBnew mode to make the circuit board, its a little messy due to having to route ten LED’s, still only a few vias and a couple of islands: 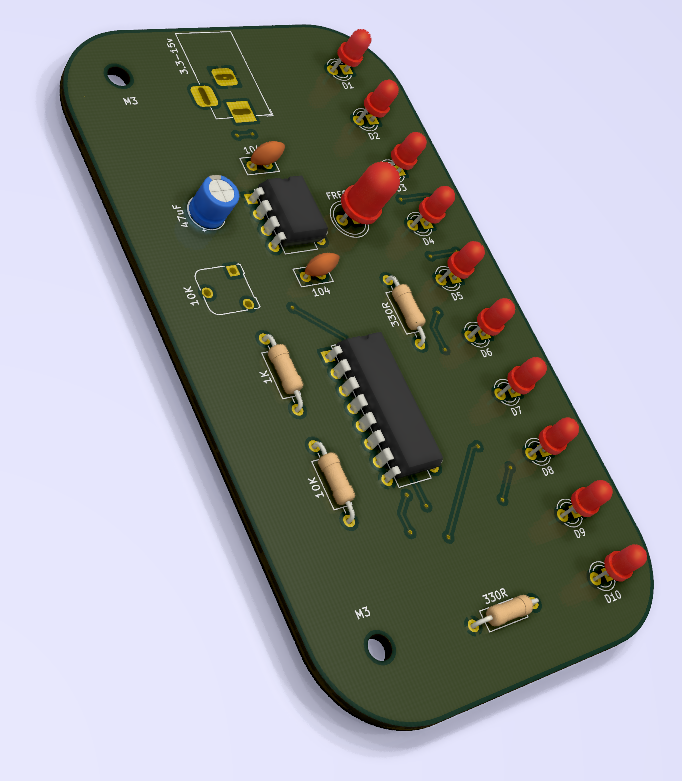 I exported the board outline and screw hole positions as a STEP file and imported into Fusion360 to make a 3D-printable case. I decided to counter-sink some nylon bolts as I had to make standoffs anyway: 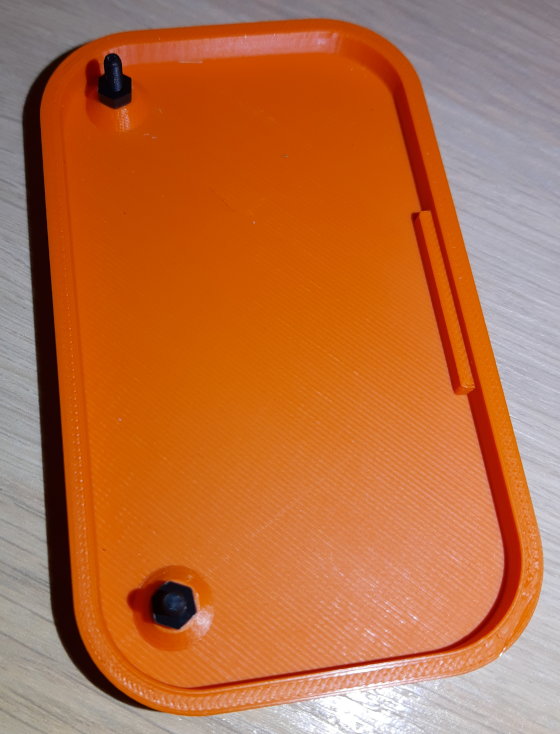 In a couple of weeks, the five boards came back from JLCPCB (cost about £3.81 shipped via Royal Mail) and fitted my case perfectly. I soldered on the components and it all worked first time! 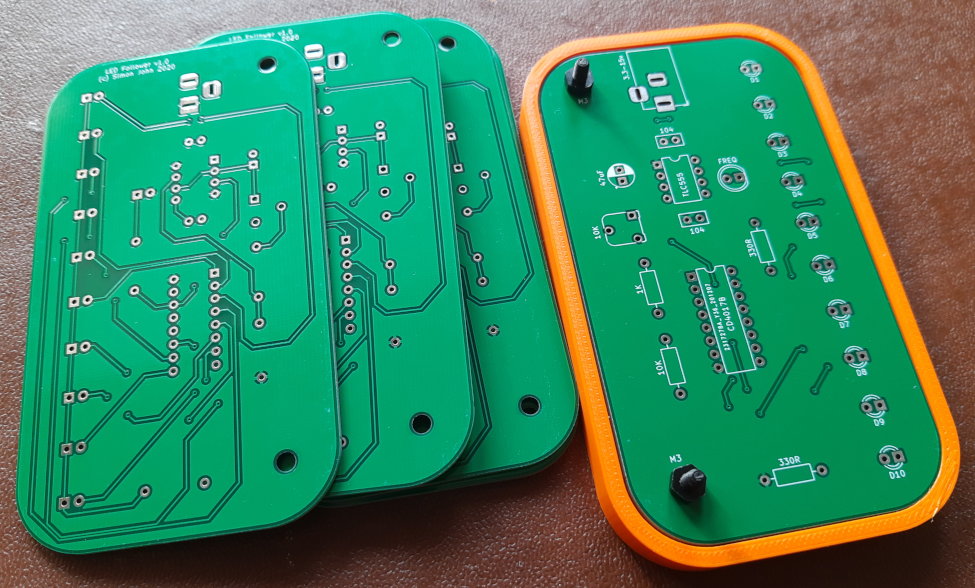 Here’s a video of it all assembled and in action - the blue LED is the square wave from the 555, the variable resistor can change the frequency:

I’ve also got some more boards coming which are just the 555 astable portion, so a lot smaller which made it worth making a panel, so I’m getting 45 PCB’s for about £8 shipped!

I’ve also been doing some more work with resizing LUKS+LVM as per my previous post but this time experimenting with growing or adding a VMDK in ESXi, which as usual was about ten times slow than doing it in Qemu-KVM. Also got Solaris 9 x86 working after many hacks, it still has basically no useful networking though. I got MacOS Big Sur working using the same VFIO setup as Catalina - other than it uses OpenCore and is slightly faster.

I setup a yum repo for SUSE Linux and looked into switching to RHEL8 (with a developer subscription and API keys to register VM’s using Kickstart) from CentOS8 to avoid Stream or shudder OEL!

I’ve also been diagnosing issues in the new Prusa Slicer 2.3 using gdb and breakpoints/backtraces, as strace was pretty useless. Its new ironing feature is very cool and the gcode-viewer and new infills like monotonic are very useful. I do think its slower than 2.2 and certainly more buggy (mainly due to GTK3) but we’re only at RC2 so maybe they’ll fix some more issues before going final. There’s no tree-like supports as we’d hoped.

Christmas has been and gone, got some lovely presents, the TV has been crap as usual. Wonder Woman 1984 was rubbish - seemed like it was made for little girls. Hopefully Dr Who will be better. The Mandalorian finale was amazing. Not holding out much hope for 2021 being any better than 2020, being post-Brexit, the inevitable recession and probably won’t get vaccinated until Q3 at least.